Lately, I have been completely consumed by a desire to photograph on Black and White film. Since I saw Sebastio Salgado’s book Genesis previewed at National Geographic in January, and fully in print at Look3 in June, I have been head over heels for those beautiful melting silver tones. You can see more about Sebastio’s book here. Although many have criticized that the images are over-processed, I believe they represent a genesis of their own. They look as though the world lay in a dark, gritty black and then mercury was spilled over it, as God created light.  I could gush on and on about these gorgeous prints, but you really should see them for yourself.

Continuing on that theme, I have decided I really want to experiment more with black and white photography, and I feel it’s essential to shoot it on film. As someone who has been shooting digital for about 8 years, it seems very awkward to go back to shooting film. For one, I decided to shoot on a film I was new to- 120 medium format film. Second, I barely learned how to process 35mm film myself when I did work with it, let alone medium format film. Therefore, I had to find a store that would process it for me. Luckily, and I mean luckily, one of only 5 shops in the DC area that even processes 120 is located 5 minutes from my house, and their prices aren’t outrageous!

Despite all of these considerations, I felt it would be fun and rewarding, and also that I should shoot 6 x 12 instead of 4x 5 or 6 x 6 like most medium formats shoot. This decision came after I decided I’m going to Ireland this year. I was so enamoured with the idea of shooting sweeping black and white panoramas of the Irish landscapes, and feeling part of an earlier time in the world. Also, Lomography conveniently came out with a beautiful camera that shoots 6 x 6, 6 x 9, and 6 x 12 called the Belair. While this camera is awesome in its versatility and it’s old-school bellows, I felt the $200+ price tag was too expensive for a toy camera that was meant for my own experimentation, especially when you consider the price of the film and the processing, and when you factor that each roll will only yield 6, 6×12 images. (I sometimes forget how spoiled I am when shooting digital, that I don’t have to fork over money before and after every shoot to buy supplies!) So, I landed on this little camera, the Holga 120 Panoramic. It seems to get the 6 x 12 with the price tag I can afford (it sells for less on places like B&HPhoto). I will get it this week and play around with it a bit so I can get the hang of it before our trip. I will be sure to post my findings here. In the mean time, I will leave you with one of my iPhone images that started me thinking about black and white film again. 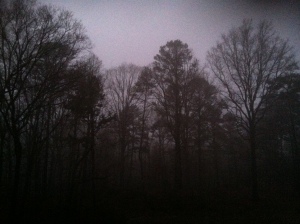